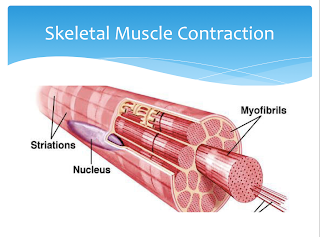 A muscle fiber contraction is a complex interaction of organelles and molecules in which myosin binds to actin and exerts a pulling action. This results in a movement within the myofibrils in which the filaments of actin and myosin slide past one another. This action shortens the muscle fiber so that it pulls on its attachments.
A skeletal muscle fiber normally does not contract until a neurotransmitter stimulates it. Acetylcholine is the neutrotransmitter that causes muscle contraction. This neurotransmitter is synthesized in the cytoplasm of the motor neuron and stored in vesicles at the distal end of the motor neuron axons. 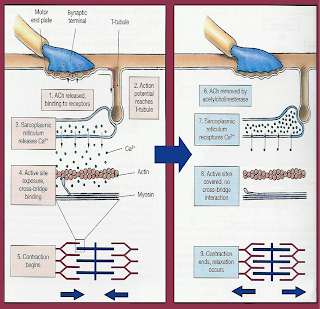 When a nerve impulse reaches the end of a motor neuron axon, some of the vesicles release their acetylcholine into the space between the motor neuron axon and the motor end plate. Acetylcholine diffuses rapidly across the synaptic cleft and binds to specific protein receptors in the muscle fiber membrane. The binding allows for increased membrane permeability to sodium ions. These charged particles stimulate a muscle impulse. 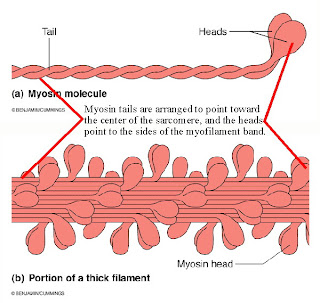 The sarcoplasmic reticulum contains a high concentration of calcium ions. In response to a muscle impulse, the membranes of the cisterne become more permeable to these ions, and the calcium ions diffuse into the sarcoplasm of the muscle fiber. When there is a high concentration of calcium ions in the sarcoplasm, troponin and tropomycin interact. This interaction causes the binding site on actin to become exposed. As a result, linkages form between the actin and myosin filaments, and the muscle fiber contracts. ATP is also required for the muscle contraction as long as nerve impulses release acetylcholine.
Posted by mkrill at 2:42 PM